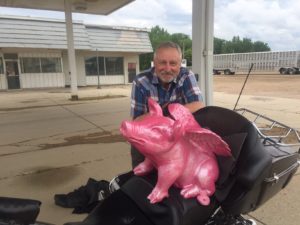 When pigs fly was a phrase used for when Scott Gottschalk made a career change.

Scott officially retired from Land O’ Lakes, Inc. on April 30, 2016 after completing a stellar 35 year career.  After spending one month going stir-crazy in retirement, Scott re-enlisted back into the feed industry.  Many were shocked to learn that on June 1, 2017 he’d accepted a position with the Form A Feed Company who had been a life-long competing company.

On his one year anniversary, Scott claimed his career move was one of the best decisions he’d ever made.  It was one of Scott’s Form A Feed colleagues that shared with Scott’s wife Astrid, “When Pigs Fly, Scott will become a Form A Feed employee.  ***I thrive on unpredictability.