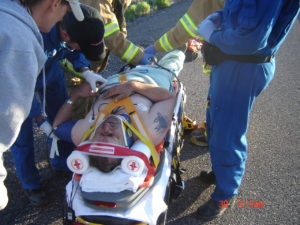 Motorcycling is one of my great passions and remains so, even after I nearly lost my life from a collision with a deer. I was riding my Harley-Davidson while attempting a 3,100-mile long-distance endurance ride from coast to coast in less than 48 hours. The crash left me on the brink of death and with little hope of ever riding again.

I began my ride by obtaining a symbolic sample of seawater from the Atlantic Ocean in Connecticut and then headed out on I-80. My goal was to dissect the USA and obtain a sample of seawater from the Pacific Ocean in California after successfully completing the ride.  While crossing Nevada on I-80 at 2:00 a.m., after riding about 2,500 miles and with my cruise locked at 75 mph, I struck a deer that bolted onto the highway.  The Nevada State Highway Patrol accident report indicated that once my bike hit the road edge, my attempt to safely maneuver the machine back onto the highway failed. The right front highway peg sliced through a thick desert sage tree trunk, causing my bike and me to flip end over end three times, landing 160 feet behind the thick sagebrush and almost completely hidden from the roadway. No one witnessed the crash and I lay broken, unconscious, and near death for five hours before being discovered.

At 7:00 a.m., I-80 traffic was stopped to allow an emergency rescue helicopter to land on the highway. Still unconscious and in critical condition, I was air-evacuated to a hospital near Reno, Nevada.  At 11:00 a.m., nine hours following my crash, I woke up in a surgical recovery room with a doctor leaning over my bed. He stated that their medical facility had never worked on a motorcyclist that had crashed at 75 mph and survived. The doctor went on to say that I was very lucky to be alive, but my life would never be the same again with the extent of all my injuries and that I’d never ride a motorcycle again.

After 150 x-rays, had been taken, I had broken 12 bones including breaking my back in three places, fracturing my collarbone in several places, shattering my left leg, breaking every rib, fracturing several fingers, and finally breaking some of my teeth. I also sustained extensive damage to my left shoulder that was completely torn from the socket severing or damaging nearly all my cartilage, tendons, and ligaments.

What does it take to get motivated to ride a motorcycle again following a near-death collision since so many accident victims never ride again?  As I lay in critical condition in an ICU hospital bed more than 1700 miles from my family, I promised I wouldn’t become a victim, but rather a champion of my circumstances. I promised to recover and once again lead a normal life, and to prove my doctors wrong by riding again.

Following the crash, all the doctors surmised that I would never ride a motorcycle again.

I later underwent six additional surgeries to mend my injuries. But the most difficult part of my recovery was the physical therapy on so many portions of my broken body. I worked seven days a week – starting at 4:00 a.m. every day – for nine months to regain my strength.  Within less than one year, I was fully recovered and enjoyed proving all my doctors wrong by riding my motorcycle 30,000 miles over the next year!