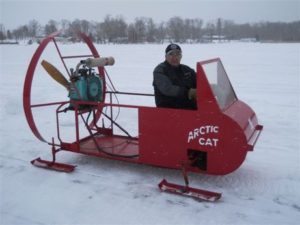 Before snowmobiles became commonplace, inventors of all sorts were working on various means to mechanically travel through snowy landscapes.  Old cars, trucks, and even tractors were modified with track systems.  Perhaps some of the most unique inventions prior to the great snowmobile craze of the mid-1960s and 1970s were the introduction of air-sleds.

A few home-built versions of various air-sled designs were in existence, but finally in the early 1960’s the “Big Three Brands” decided to enter into marketing commercially built air-sleds.  This was to be the next “Big Thing” in snow travel.  Today, few snowmobile enthusiasts know much about this short-lived, but important piece of air-sled history.

In 1960 Richard Harrison and his family formed the Trail-A-Sled Company (Pre-Scorpion) and began creating the first commercially built air-sleds in Crosby Minnesota.  They manufactured and sold 15 four-place air-sleds that looked much like a small air-plane without wings and which boasted a rear-engine 125 H.P. Lycombing aircraft engine with a wooden prop that could reach speeds of over 100 mph.

Not to be outdone with what appeared at the time to be the newest and best way to get around in the snow, David Johnson from Polaris in Roseau Minnesota in 1963 commissioned Trail-A-Sled to manufacture 25 two-place Polaris air-sleds utilizing the same rear-engine aircraft power-plant and prop that could reach speeds of over 100 mph.  After only a few Polaris air-sleds were sold, Polaris quickly deemed them too dangerous and impractical and then scrapped the remaining inventory in a land-fill in Roseau.

Ironically at nearly the same time in late 1962 and also not wishing to be outdone by his other main competitors, Edgar Hetteen from Arctic Cat in Thief River Falls Minnesota developed a 1963 Arctic Cat air-sled prototype that only had a meager 16 H.P. Onan rear-engine and a wooden prop.  This underpowered machine only worked well when driven on ice.  Arctic Cat employee Lyle Bjorge did a few test-runs, but the project was determined unfeasible so the prototype and the idea was scrapped.

As history played out, the unique albeit dangerous air-sled movement came to a rapid halt within only a three year span as both the rear-engine and front-engine snowmobile designs began taking hold of market.