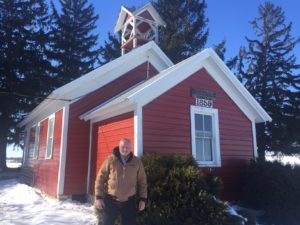 Few today, could even envision attending a one room schoolhouse with a single teacher educating all the students ranging from first through eighth grade within such a tiny classroom.  From the recesses of my memory lie the fond thoughts of the very same one room schoolhouse that I’m pictured in front of.  I attended this school in 1960 at five years of age and returned fifty-six years later in 2017 to recapture a glimpse from my past.

In the Fall of 1960 I would depart our farm house in the early morning and hike more than a mile north to my one room schoolhouse.  Neighboring farm kids could be seen in all directions making their way to school each day.  Some walked while others rode their bicycles.  If the bell in the steeple started ringing, one had to hurry because that meant if we weren’t in our seats within five minutes, we would be marked tardy for class.

Since I was the youngest in the classroom of nearly a dozen farm children, my school desk was in the right front next to the teacher’s desk.  Imagine my surprise as I peered through the window more than five decades later, only to find the schoolhouse just as I remembered from so long ago.  The black chalkboard was still intact and my thoughts immediately reminisced how neat it was to write on it with white chalk.  We would use a chalk-eraser to clear a space on the board, and I felt extra pride whenever the teacher would occasionally ask me to clean the chalk erasers.  Back then the notion of learning on something called a computer was still decades yet to come!

Each day prior to lunch, we were granted a short recess time to play outside and use the boy’s or girl’s outhouses in which to go to the bathroom.  About noon the schoolhouse bell would then ring and we would scurry back into the schoolhouse where a deep pan of cold well-water from a hand-pump was waiting for us to scrub our hands and faces before eating the box lunches our Mothers had packed for us.  As soon as we’d finished our lunches, the teacher directed us back to our studies.

This may have been my educational process for the next eight years, however, my Mother insisted that my Father sell our farm, and all our machinery and animals within a couple of months into my first year of schooling.  With our farm sold, our family relocated to Rochester, Minnesota, since my Mother had insisted that none of her children would grow up with a one room schoolhouse education.  Our farm family soon learned that we would never be happy living in the city, so within only a few more months my folks purchased another farm near Byron, Minnesota and I began attending my third school within my first year of schooling.  It was there that I went on to finish all twelve years of schooling and made life-long friends with my classmates.