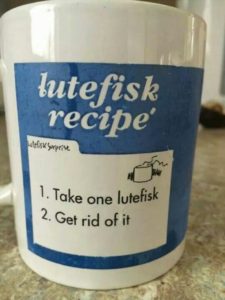 There are a hearty bunch of folks, most generally of Scandinavian heritage that make it a ritual to consume Lutefisk several times per year.  I married one of those and the rest of the folks can only ask, What were they thinking?

Lutefisk is the result of soaking cod fillets in lye to create an interesting assault on one’s palette called Lutefisk.  At our first Christmas together, my wife Astrid of Finnish and Swedish heritage cooked up her Lutefisk concoction that left our entire house smelling very badly.  She was so proud as she prepared my plate of jelly-like, Lutefisk and mashed potatoes covered up with a white sauce gravy.

I loved her then and I love her now, but by no stretch of the imagination can I state how difficult it was for me to act as though I enjoyed her traditional family Christmas meal.  As she set the plate in front of me my eyes started stinging and watering.  I took a hearty mouthful and I can only compare it to the equivalent of eating a big snotty booger with a taste that can not be fully described!  Somehow, someway I consumed her fixings, but the subsequent burps and aftertaste left me numb all over.

My beloved wife and I have now been married for 37 years, and for that many years I’ve consumed her traditional Lutefisk meals, as have our sons, and now their wives and their children as well.  I hate to admit it, but after all these years, I’ve acquired a taste for this most absurd delicacy.  Now I proudly proclaim that I’m one of the tough ones that eat Lutefisk and make subtle jeers at folks who aren’t tough enough to survive a meal of Lutefisk.

No matter, I still always lament, what were they thinking?