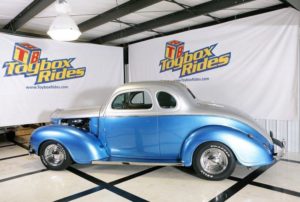 David Gottschalk was born on May 20, 1936 and was raised near Rochester, Minnesota following the “Great Depression” which financially devastated our Nation for many years.  He and his family like most others of that era were forced to work very hard and find ways to make do on limited incomes.  With an unequalled work-ethic, in his early teens, Dave earned money as a “paperboy” and a “shoe-shine” boy.  In 1950 and at the age of 15, he used $100 of his hard-earned money to purchase a used 11-year-old 1939 Plymouth Coupe.  With that special “First Car” Dave finally had an automobile he could drive to school, as well as to his football and wrestling activities, and for sure as transportation to his part-time jobs.

Shortly after getting his sporty car, Dave started dating his new girl-friend Rose Anna O’Byrne (Born August 11, 1935).  That special “First Car” was used for everything from getting to and from high school, but also for going on movie dates or attending a dance together.  Dave and Rose’s “First Love” was ignited and further developed as a direct result of Dave’s “First Car”. Rose remembered that her new boyfriend loved that car so much, he would even eat his school lunch every day while sitting in his beloved 1939 Plymouth Coupe out in the high school parking lot.  That “First Car” was the catalyst that helped lead to Dave and Rose getting married and raising a family of five children.  Prior to their wedding, that special “First Car” was traded off for a more practical used four-door Plymouth that would then be capable of transporting two newlyweds and their impending family.  On many occasions throughout his lifetime, Dave spoke fondly of the countless memories that began with his “First Car”.

On July 14, 2017 at 81 years of age and celebrating over 63 years of marriage together, David and Rose Gottschalk were surprised with a gift from their family.  That gift was a completely restored 1939 Plymouth Coupe.  Their expressions of joy and heartfelt emotions were priceless as they drove away in their “Last Car”, just as it had once been his “First Car”.  THANK YOU, MOM AND DAD, FOR FALLING IN LOVE, FOR STAYING IN LOVE, AND FOR SACRIFICING YOUR ENTIRE LIVES FOR YOUR CHILDREN.