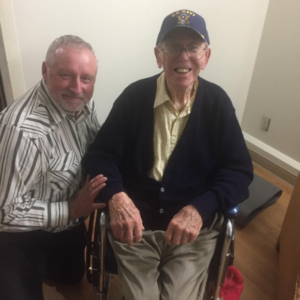 It’s モンクレール tシャツ hard to even imagine what the heroes from World War II sacrificed to serve their country. I’ve had the honor and the privilege to know Bruce Cottington for nearly four decades. This humble, 90-year-old man who has recently suffered a few debilitating strokes, demonstrated an amazing act of bravery in his youth on behalf of the United States of America.
As a 15-year-old sophomore in high school, he joined the Navy in 1942 following the attack on Pearl Harbor. At the time, the minimum age to join the U.S. armed services was 17 years-old with parental permission. Bruce convinced his mother to say he was old enough and thus he enlisted by using an earlier year for his date of birth.
Bruce was among thousands of men and women who circumvented the military recruiting process so they could join the armed forces and fight for their country. These “Child Soldiers” became members of a national organization called Veterans of Underage Military Service (VUMS).
In all, sixteen million Americans served in World War II, but today there are only 600,000 remaining. It is estimated that by the year 2036 there will be no more living veterans of WWII.
Bruce Cottington was born January 22, 1927 on a dairy farm near Forest City, IA. He was the 10th of 13 siblings. Five brothers, one sister, and Bruce served in the armed forces. Theirs was love of country and patriotism few today could fathom!
Bruce became a radioman and served with the 4th Marine Division. Later, he served in the Amphibian Navy on a LCI(G)-462 gunboat, which were referred to as rocket ships. He was involved in seven WWII battles in the Pacific. When the war ended, Bruce returned home and entered college.
As a junior in college Bruce volunteered for active duty in 1950 during the Korean War, where he served in another key battle. He was honorably discharged from the Navy in 1952. He returned home and graduated from college with a degree in business administration. He and his wife Florence had three sons, Scott, Jim, and John.
Bruce is the epitome of what a veteran is. He unselfishly served his country in two wars, and then worked his entire lifetime in the service of others.
Please ダウンコート メンズ take time to thank a veteran every chance you can for the freedoms and the privileges we all share in our United States of America. Let’s cease our political bickering and begin to unite now as one nation under God.