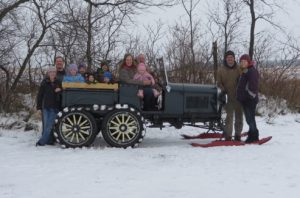 The effervescent smiles from those six grandchildren, all under the age of six was priceless because of their fun-filled ride on their Grandpa Scott and Grandma Astrid’s 1926 Model T Ford pickup truck snowmobile.

A Model T Snowmobile one may ask?  Well, in the early 1900’s it was nearly impossible for rural doctors to make an emergency house-call due to heavy snow conditions.  Similarly, rural postal carriers and rural electric-line employees were hampered by wintery weather.

Thus, nearly 100 years ago, a now defunct business called the Snowmobile Company invented an automobile/snowmobile conversion kit that substantially changed travel in the snowy northern climates at a time when the “Horse-less Carriage” era was firmly taking hold.

The Snowmobile kit consisted of an extra rear axle and wheels, by which a metal track-system was adapted on the two rear axles.  The front wheels were removed and large snow skis were installed.  With only those few automobile modifications, it then became possible to traverse roads and fields under some heavy snow conditions.  One must wonder how many lives were saved because a doctor could reach an isolated patient.

On a beautiful snowy 2016 Christmas Day, the Gottschalk Family was truly blessed as they experienced the look, the sound, and the feel of a Christmas from a time long ago.

Imagine if you will, first cranking over by hand the primitive Model T engine, then placing the youngsters in the back of the open truck and covering them a thick, warm blanket.  Try to envision giving your beloved wife a smile, a hug, and a kiss, and then off the family would go across the snowy fields and unplowed roads to celebrate the holidays with friends and family members afar?  Oh, but a simpler time!