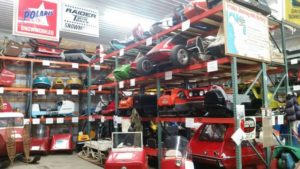 The beginnings of a new family snowmobiling endeavor began only a couple of years ago, when Scott, Trevor, and Travis Gottschalk were walking through a local swap meet and spotted a 1970 Wheelhorse snowmobile for sale that had just come out of a barn.  Scott mentioned to his sons that while growing up on a farm in southeastern Minnesota, their Grandpa Dave Gottschalk had purchased that same machine brand new for our family in 1970.  Scott went on to say it always seemed like we only ever rode it a mile or two and then walked back home after it broke down.

Trevor and Travis insisted on purchasing the relic Wheelhorse sled and thus began our family’s incurable sled collecting illness!  In fact others with this illness have informed our family that the only cure for the sickness is death.  Well, a short while later, Trevor had purchased a pull-behind sleigh so we drove to the Pequot Lakes Antique Snowmobile Rendezvous to pick it up and that is where our family met Dick Hummel for the first time.  As we walked by his trailer of antique rear-engine snowmobiles, we remarked those were the coolest snowmobiles we’d ever seen.  He then instructed both of us to take a couple of his machines and ride them down the trail for a spell.  We commented back on how odd that he would allow total strangers to simply drive off with his prized antique snowmobiles.  We will never forget Dick’s words as he said, “You boys just go out and have some fun.  I may be an old man, but I’m pretty sure if you don’t come back with them, I can still run you down, since these old sleds won’t go very fast.”

From the very moment we started down the trail, a sense of joy such as we’d never experienced overcame us.  We had always had a need for speed, and yet nothing was more serene than slowly and more quietly sliding along the trail on +50 year old jalopy snowmobile.  We had huge smiles on our faces, as we passed folks along the way, many of which were giving us a “Thumbs-Up” gesture.  Never had we experienced such joy while riding on more modern snowmobiles.  The illness was setting deep into our bodies, and without warning we were hooked beyond repair for the love of old snow-machines.  Before that day came to a close, Dick Hummel had sold us our first antique snowmobiles.

In only two years, and with the assistance of several snowmobile museums and private snowmobile collectors across the USA, we have gathered +175 of some of the most unique and historical snowmobiles to be found anywhere.  A small sampling would be Evel Knievel’s snowmobile jumped for a dare-devil stunt on national television in 1977, one of the three Scorpion snowmobiles that made the iconic journey from Crosby Minnesota to Alaska in 1967, several prototype snowmobiles and one-of-a-kind machines, several racing sleds, the only exhibit in the world of the ultra-rare “Big Three Air-sleds” from the early 1960’s” (Trail-A-Sled, Polaris, Arctic Cat), and four different rare Eliason Motor Toboggans (First-ever Snowmobiles), to name a few.

The greatest gift we’ve discovered since our family recently entered into the world of antique snowmobiles is what a wonderful group of people we share this hobby with.  We have yet to meet anyone who isn’t willing to offer their help and friendship.  We have been truly blessed for knowing all of you that we’ve met thus far.

In closing, we want to mention that as a family we subscribe to the belief that for the short time any of us live on this earth, no one really owns anything, but rather we are asked to be the care-takers of special pieces of history to share with others and then ultimately do our very best to pay it forward.  Please come for a visit to our Museum located near Kimball, Minnesota and we promise you will be witness to a fantastic learning experience.  Appointments are appreciated.