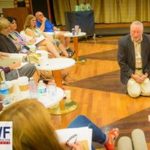 When I was an eight-year-old boy, my entire family nearly lost our lives one night during a harsh January Minnesota snow storm.

Pulling myself out of my bed, I nearly fainted.  It was difficult to remain standing, but I could make my way to my four-year old brother’s bed.  Shock set in as I saw that he was sleeping in a pool of vomit and unconsciousness.  Fear overtook me as I screamed, “Mom, come quick we’re all very sick”, as I stumbled into my sister six-year old sister’s bedroom.  The color drained from my face as I discovered her lying unconscious also in a pool of vomit.

I made my way down the stairway leading from our upstairs bedrooms to my parent’s bedroom.  My father was working his night-time job, so I panicked further seeing my unconscious mother.

After repeatedly shaking her, she briefly opened her eyes and whispered, “Scott, you need to call your father at work.”  As the rest of my family lay helpless in their beds, I made that call to my Father.  In response to my questions, he stated, “Scott, I have no idea why you’re all so sick, because I feel fine.  We all ate the same food for supper, so it can’t be food poisoning.”  I responded back, “Yes, but Jerry, Julie, and mother have all fainted and I wasn’t able to even get Jerry or Julie to wake up.”  With that my father said, “I’m sure it’s not as bad as you think and most likely you all just have a bad case of the stomach flu.  I need you to find a way to get your little brother and sister downstairs and into bed with your mother.”  My father went on to say, “Scott the weather reports don’t sound good so I may be late getting home in the morning.”  My father finished by mentioning, “Scott, you are the man in charge tonight.  Everything will be fine.”

As I hung up the phone, fear gripped me once more.  What I didn’t know then but know now, is that on that frightening night, in that old house in the lonely countryside of our farm, God directly intervened to save the life of my family and me.  On that evening the harsh winds and heavy snowfall created a large snowdrift over the top of our roof, which in turn sealed up the exhaust pipe and cut off the ventilation for our home.  While we slept that night, our home was slowly depleted of life-sustaining oxygen and our breathable air was replaced with the toxic, odorless, tasteless, yet deadly fumes from carbon monoxide.  My family and I were moments away from dying in our sleep.

The time was now 2:00 a.m. and I was close to losing consciousness once more, as my own lungs, my body and my brain were rapidly suffocating from a lack of oxygen.  I had no idea that I was dying.  With absolutely no understanding of why I felt compelled to do so, I began opening every window in the downstairs.  Why would that be such a miracle?  Well, I was only a small eight-year-old child without the strength to open the old, warped windows of our home.  Somehow though, that night, I could crack open all the belligerent windows.  Remember also that for some miraculously strange reason, I was opening these windows during a raging snowstorm with sub-zero temperatures.  What young child would even think to do this?

Outside the strong blustery winds from the snow-storm were pushing the frigid, yet fresh air into our home.  I vividly recall my mother whispering, “Scott, why on earth do you have all the windows open?  It’s freezing in here?”

As the horrors of that night elapsed into the quiet calm of a sunny, yet snowy new day, we waited patiently for the arrival of my dad.

Soon a heating and ventilation expert determined the cause of our near-demise.  He grimly explained, “The lethal levels of carbon monoxide in your home should have killed your family.”

Within days, everything returned to normal.  That is until my parents began thinking more about what had driven me to react in the way I did on that night.  Several days later my father asked me to go around our home and open the windows, just as I had done on the night that we nearly died.  Try as I might, I was unable to open even one of those same windows by even the slightest crack!

Do you believe in Angels?