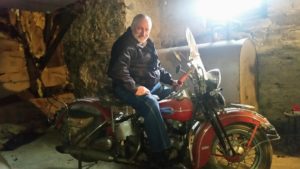 The beautiful machine lie dormant exactly where it had been parked nearly 4 decades ago by it’s now 86-year-old owner.  Through some keen investigative work, I’d recently discovered an amazing piece of motorcycling history.  I ventured down into the dark cellar of a 100-year-old home, and became one of only three to have viewed the all original 1946 Harley-Davidson motorcycle after more than 40 years of being hidden from sight.  It still sat proudly although covered in cob-webs and eons of dust masked it’s once defining red paint theme.

This sort of historical discovery is becoming ever rarer.  The feeble owner recalled how at age 18, following the end of World War Two, he bought his brand-new Harley-Davidson motorcycle.  Countless WWII veterans had used military Harley-Davidsons during the war and upon returning, there was a mad rush to purchase Harley’s first iconic “Big Twin” Knucklehead engine motorcycle.  The motorcycles were faster and more powerful than anything built before.

The old man shared stories of his youth and smiled about his escapades while riding his Harley.  Early in life, he became a dairy farmer and because of the harsh workload, he was only able to log 19,000 miles before finally placing his beloved motorcycle down in the cellar.

The majestic old HD “Knucklehead” lies forlorn and all but forgotten since being hidden away decades ago.  If it could speak, the stories it could tell.

It took little stretch of my imagination to envision myself rumbling along with the wind blowing through my hair on a warm, sunny day.  It would be a dream come true to ride a royal ancestor of today’s modern motorcycles.  I can only contemplate what will become of the hidden Harley.

Never forget the impact that our history has on our present and on our futures!