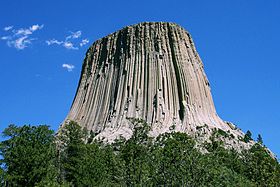 Many years ago, while on vacation, our family stopped at Devils Tower National Monument located in northwestern Wyoming.  This towering monolith has fascinated millions since becoming America’s first national monument in 1906.  The mass of rock, once the neck of an ancient volcano stands 1,267 feet high above the earth and is the largest of its kind in the USA.

Devils Tower boasts a rich and colorful climbing history by which tens of thousands have attempted to climb, yet a mere fraction make the summit of this imposing and technically difficult climb.  My young 8-year old son Travis pointed to the heavens spotting one such brave climber and said, “Dad, can we come back here some day and climb Devils Tower?”  I patted him on the head and replied, “Sure son, we’ll do that someday.”

Fourteen years later, Travis was a 22-year old Division I college wrestler and finishing up his college years with a degree in Mechanical Engineering at South Dakota State University in Brookings, SD.  He called me one day with an announcement that one of his final elective courses was rock-climbing.  He further stated that the instructor had shared that anyone from his class that climbed Devils Tower would earn an automatic A for the class.

My response was, “Well, your college wrestling has made you an amazing athlete, so my guess is that you will be one of the rare few to successfully climb Devils Tower.”  Travis then went on to inform me that he’d gotten permission from his instructor to allow me to climb with him in six weeks.  The blood rushed from my face as I shouted, “Travis I’m a 53-year old fat guy and I’m not capable of that kind of climb anymore!”

Without hesitation, Travis told me to “Man-up”, start working out, and lose 15 pounds, because I’d promised him years ago that we would climb Devils Tower one day.

Well, I worked out for six weeks, lost the weight, got in shape and together Travis and I successfully summited Devils Tower in an arduous climb that took eight hours of climbing nearly straight up and one additional hour to rappel back down.  In fact, climbing Devils Tower would be like climbing the outside of the Empire State Building in New York City, so it is not on the “Bucket List” for the faint of heart.

Moral of the story, “Be careful what you promise your kids, because as a parent they are likely to hold you accountable one day!”