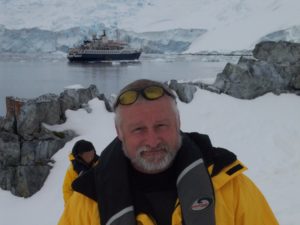 On my “Bucket List” was the goal to set foot on all seven continents of the world before I kicked the bucket.  My dream was fulfilled when I reached my seventh and final continent by sleeping in a tent in Antarctica on Christmas Eve of 2013.  Oh, yes, it was COLD!

Growing up on a livestock farm, left little time on any given day for family travel.  We had to milk our dairy cows twice each day, 365 days a year.  I don’t remember going to many graduations or weddings, because we could never venture very far and still get back to the farm to meet the demands of caring for our livestock animals.

At the age of 18, following the early morning milking chores, I stood in the barndoor of our dairy barn watching the sunrise, and informed my parents that after getting a college education, I intended to see the world.  My father said, “You already sound like a college idiot with no common sense.  Why would you want to see the world?”

I stated the simple fact that I’d barely left our rural farming community for much of my life, and now my plans were to get to every continent on the planet.  That was at age 18, and by age 58 my dream became a reality.

Antarctica was the most pristine and beautiful place I’d ever encountered.  Obviously, it isn’t a tourist destination and only a few hundred brave souls venture to Antarctica on any given year.  Thus, mankind has done little to negatively impact the frozen continent.  Because so few humans set foot on the ice-shelf of Antarctica, few of the unique creatures have ever seen a human-being, leaving them unafraid of us.

I often share that if I had the opportunity to visit only one of the seven continents again, which would I choose?  Without hesitation, I share that it would be Antarctica the final frontier.