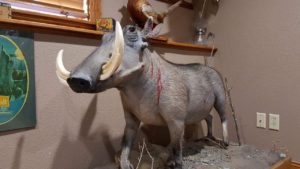 My wife Astrid and I learned a valuable lesson while completing an arduous international consulting assignment in Uganda Africa in 1995.  We spent an entire month helping establish a viable dairy industry in a country that was struggling to provide adequate food and financial stability for it’s people.

Before departing Africa, we had the privilege to spend a few days on safari touring a couple of massive game reserves.  We remember seeing road signs posted throughout the  game reserves that threatened massive fines and/or jail sentences for anyone caught venturing into the reserves at night and that at no time were people on safari allowed to leave the confines of their vehicles.  In truth, wildlife within African game reserves differ greatly from National Parks in America, because in Africa much of the wildlife considers humans as part of their food chain!

One evening while eating at a small table outside our safari lodge, we spotted a warthog.  The outside area of our safari lodge was completely surrounded by a steel safety fence to prohibit dangerous wild creatures from entering the compound and harming guests.  As we ate out meal and discussed the strange-looking warthog, I concluded that it must be similar to a pet “pot-bellied pig” back home.  Astrid disagreed and was confident the warthog was no pet and had simply burrowed under the fence to get at some better food.

Warthogs may be one of the ugliest creatures on earth both in looks and in personality.  They have extremely dangerous ivory tusks protruding from their jaws capable of easily slicing through a human’s leg.  Since I was still convinced we were observing a pet warthog, I passed closely by him on our return to our room for the night.

Thankfully I was wearing running shoes because I may have set a one-hundred meter speed record running away in fright when the warthog snorted and then aggressively charged after me with lightening quickness and agility.  Thank goodness he stopped short of attacking me and later when my racing heart had calmed a bit, my wife Astrid taunted me stating, “It was sheer luck the warthog had stopped when he did because I’d definitely been losing the race with him as he closed in on my unprotected backside!”

Oh well, luckily I’d packed some extra clean underwear because I had a real need about then.