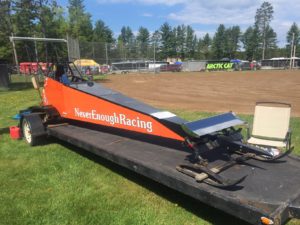 One of the first custom race sleds of its kind to break the 100 MPH barrier in the 1970’s with its original 500 cc Centurion Engine.  Later it reached a documented top speed of 127 MPH in a 1000-foot timed Ice Drag Race with an upgraded 1996 Arctic Cat ZRT 600 cc high performance two-Stroke Engine fully ported, shaved heads, and a balanced crank.  Every 1000-foot pass it consumes one gallon of 110 octane racing fuel mixed at 40:1 pushed with an electronic fuel pump forcing fuel into the three large 42 mm Mikuni Carburetors.  The previous owners named this machine, “Never Enough Racing”.

What a rush it will be this winter on a frozen Minnesota lake blasting from 0 to 127 mph in a heartbeat!