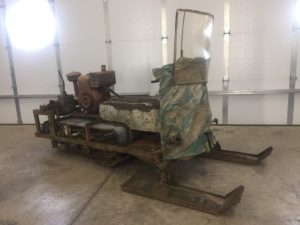 The details of Grand Meadow, MN. farmer Leonard Hedstrom’s machine as described by his son Martin who was 6 years old in 1954.

His Father wanted a snow-machine that could transport the family to a neighbor’s house, a couple miles away, often at night in blizzard-like conditions; as well as for a wintertime piece of equipment that could ease their chore burdens during the harsh winters before commercialized snowmobiles.  He drew up the plans for this machine on an old feed sack, then in the winter of 1953-1954 next to his pot-bellied shop stove, he fabricated it from spare parts, farm implements, and used car parts.

This amazing snowmobile artifact can be viewed at the Gottschalk Antique Snowmobile Museum along with 200 other historical snow machines.