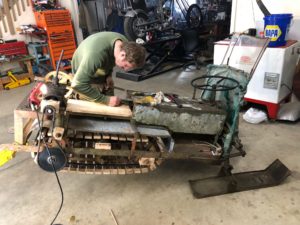 Built in 1954 by a farmer in S.E. Minnesota before the advent of commercialized snowmobiles, this snow machine relic was heavily used from 1954 until 1962 and then abandoned outside for more than 50 years.  The engine was bad, the wooden track was rotted, the transmission seized up and destroyed.  There was a tree growing through the middle of the back half of the machine.  The historical snow machine was destined to end up in a salvage yard.  That is until…

New hardwood pieces were cut and installed on the man-made roller chain track.  A replacement 1938 3 speed with reverse Chevy transmission was installed.  All the seized steering system was freed up for use.  The tree growing through the back half of the machine was removed.  The engine was overhauled and now runs like a well-tuned machine.

To see this machine, come visit the Gottschalk Family Antique Snowmobile Museum near Kimball, Minnesota or attend some of the Minnesota Snowmobile Shows during the winter and see it back in action again.