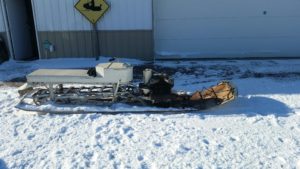 During World War II, our Country believed an invasion was possible on USA soil by way of the borders of Alaska.  In a defense measure, one hundred and fifty 1943 Eliason Motor Toboggans were shipped to Alaska.  These white military machines were each powered by a 1940 45 CID Indian Scout Motorcycle engine with a three-speed transmission.  The compartment under the seat was designed to store up to 3 military rifles and the compartment in front of the driver near the fuel tank was designed to store ammunition.

More than 500 US troops were assigned to this covert Alaskan war defense duty.  The Eliason Motor Toboggans were kept hidden inside secret snow caves, but were regularly used during drills to prepare for an impending attack on American soils.  Three soldiers typically rode the nearly 12’ long military snow machines, each armed with a rifle, including the operator who used the left-handed tiller-steering with a built-in throttle to maneuver the machine while still having the right hand free for his weapon.  The kick-started Indian engines were capable of propelling the Eliason Motor Toboggan over 60 mph.

Recently the Gottschalk Family Antique Snowmobile Museum acquired one of these rare military snow machines from the widow of a WWII veteran in N.W. Canada.  With some difficulty it was then brought into the USA.

During the 22nd Annual Pequot Lakes Rendezvous the Gottschalk’s brought this unique historical machine to be seen along with giving rides to dozens of people.  In fact Trevor Gottschalk rode the 1943 Eliason during an entire trail-ride and in all this well-built survivor ran for nearly 8 hours.  Comments were made that perhaps that was the oldest running antique snowmobile operating in America.  Yes there are older ones in museums, but this historically significant one is being shared as a working machine for both young and old to enjoy.