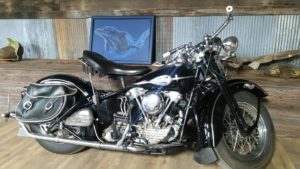 The “Knucklehead” motorcycle as it came to be called because of its distinctive knuckle-appearing rocker covers was the best and boldest move in HD history.  With a 40,350 bike production run lasting from 1936-1947, the Model E was the first HD “Big Twin” engine that sported the options of a 61 C.I. (1000 cc) or 74 C.I. (1200 cc) overhead-valve power plant and the 1st Harley engine to use a recirculating oil system.  This model was also the first HD to have its dashboard integrated into its tank.  This rare motorcycle was one of only 1,742 civilian HD motorcycles built in 1942 and from 1942-1945 only a total of 3,632 civilian HD motorcycle were manufactured during WWII, since HD had moved nearly all of its production over to wartime military motorcycles.  Countless soldiers rode military Harleys, and upon their return from the war, many went out and bought Harleys.

In 1942 after serving his time in WWII, James Behm bought this new “Knucklehead” on the east coast, then strapped his belongings on the fender of the bike, took a photo of his new bike, and then rode it back to his home to Parma, Michigan.

In 2017 the Gottschalk Family acquired this historical one-owner motorcycle that was sold on the James Behm estate sale.  Along with the motorcycle came photos of the bike in 1942, 1950, 1993, & 2007.  In addition there are folders of all the documentation and receipts for what he did with his beloved “Knucklehead” throughout his lifetime.  This motorcycle was manufactured and designed while the original HD engineer and founder William S. Harley was still alive.  This motorcycle began logging miles while Adolf Hitler was still attempting rule the world.