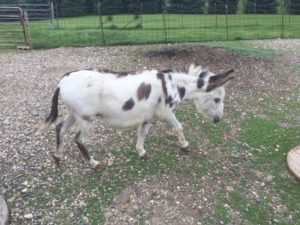 Pedro is a very small white burro with black spots, and he has a huge personality.  He is technically a Miniature Spotted Ass, but he can be a BIG ASS at times!  Depending on his mood, he can be the cutest, most lovable creature, or he can demonstrate some real attitude!

Pedro loves carrot treats and having his oversized ears affectionately scratched.  Early in the morning when calling out his name, Pedro obnoxiously unleashes his loud braying one would typically associate with a much larger animal.  He makes such a racket that without doubt the entire neighborhood is awakened whether they were ready or not.

Certain versions of the Bible record that prior to his crucifixion, Jesus rode the white colt of an ass into the city.  It is fabled that humble little donkey later stood in the shadow of the cross as Jesus died.  Forevermore the imprint of the Cross of Christ has been marked upon the backs of burros and donkeys.  Note the Cross of Christ imprinted onto Pedro’s back and shoulders.